The communities of Waverly, Athens, and Sayre are situated in a beautiful valley system, rich in history and archaeology. The meeting of the two rivers of the Chemung and the Susquehanna was an important conduit for trade and population movement and the center of very early contact between the native peoples of the region and the first European explorers to make their way into the ‘interior’. This was also an important area for some of the first high-quality avocational and professional archaeology conducted in this area of New York and Pennsylvania. Spearheaded by the enthusiasm and the careful eye toward detail and the clarity of mind of Louise Murray, a series of excavations of now famous sites were completed in the late 1920s and 1930s, revealing an impressive heritage of pre-Iroquoian and Iroquoian peoples on the point and beyond (now forming the core of collections at the Tioga Point Museum). The discoveries also attracted the attention of individuals now noteworthy in the history of the early days of the development of professional archaeology in the United States – such as Warren K. Moorehead of Ohio moundbuilder fame and James B. Griffin. It is thus ironic that although the discoveries made at these sites, such as Murray Garden and Abhe-Brennan sites, are featured still today in the professional and popular literature about native American archaeology, virtually no professional archaeology has been completed in the region since those early 1930s excavations. 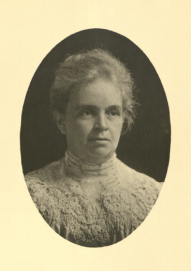 Unfortunately, there are not many professional archaeologists at work in the United States and these folks are employed in the government (such as the National Park Service), in museums, cultural resource management, and as professors at universities and colleges. And these individuals tend to be focused on the archaeology of a required region (such as government properties) or often continuing research in the region that served as the focus of their Ph.D. or MA. projects. This, thus, often leaves large voids in any long-term archaeological research of many areas across the continent – a plight that has befallen the Tioga valley and surrounding area. Until the SRAC was founded. The creation and continuing growth of SRAC is a perfect example of an institution serving as an anchor to bring together avocational and professional archaeologists, and an interested public, to try to document and preserve the region’s historical and archaeological legacy. In fact, the origins of SRAC, based on the large artifact collections of Ted Keir and Ellsworth and Dick Cowles, hark back to the famous early excavations of the 1930s. Some of the artifacts in their collections, and now at SRAC, are from those noteworthy sites. In fact, Ellsworth Cowles was an important member of the research and excavation teams that conducted the professional excavations of a number of the sites in the early 1900s, from Spanish Hill to the Abhe-Brennen sites. 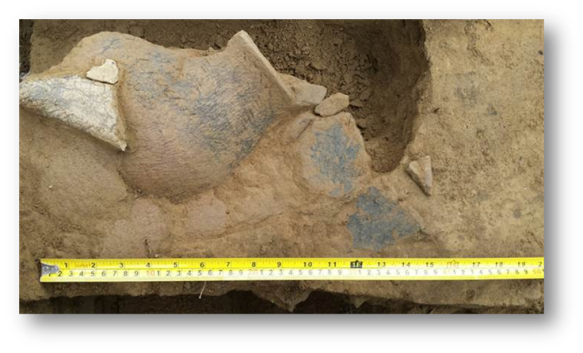 In the intervening years between the 1930s to now there has been great advances made in the field of archaeology, from the development of radiocarbon dating to the use of ground-penetrating radar. We also have a much firmer grasp of the changes across time in the development of ancient societies in the region, although many mysteries remain (such as the origins of the Iroquoian societies). With this new knowledge, and the realization of the impact of modern life on the landscape and thus on the archaeology, we have focused our attention at SRAC to re-discovering and documenting the sites first explored in the 1920s and 1930s. This focus inextricably led to SRAC’s first excavations at the DeSisti site – a site well known to avocational archaeologist, and professionals. The site locale has been known for well over a hundred years, with extensive surface collections of artifacts by prominent local residents now archived at several regional museums and institutions. In addition, the site’s location is now under construction and without the generosity of the landowner in permitting and facilitating the excavations, much knowledge would have been forever lost. Thus, in 2016 the Susquehanna River Archaeological Center conducted test excavations on the DeSisti site (36BR20) near the confluence of Cayuta Creek and the Susquehanna River in Bradford County, Pennsylvania – work continued each summer until final excavations in 2018. The excavations, which included volunteers from the local community as well as college students and interns from Bloomsburg University, revealed a significant number of very large pit features that had been filled with copious amounts of refuse. We recovered, for example, broken pottery, stone tools, animal bone (including what appear to be elk antlers), and organic material (such as burned corn kernels, nutshell, and wood charcoal). A ceramic pipe stem fragment, netsinkers, wood-working tools such as celts and various groundstone (pecked) items, and fragments of fire-cracked rock were also discovered. Some of these items are now on display in the museum at SRAC.

It seems likely that SRAC uncovered a storage and work area that was located on the river terrace’s edge and just south of what had probably been the village(s) location. The type of pottery recovered suggested that the site’s occupation spanned the late prehistoric period – a time critical to understanding the development of what would become known as the historic Iroquoian/Susquehannock tribal groups. A series of five radiocarbon dates suggest the major occupations centered around 1046-1092 A.D. and 1320-1350 A.D. One important radiocarbon date was retrieved from a corn kernel, which dates to the more recent occupation (1320-1350 A.D.). These are the first radiocarbon dates of this nature for the region. Cleaning, cataloging, and analysis of the artifacts, and organic materials from the site’s sediment, are still being processed and assessed. Once this crucial work is completed, a final report will be created and the results announced to the public, and a publication submitted to a professional journal. The creation of a new archaeology laboratory space on the second floor of SRAC, developed with a generous donation from Barbara Sowinski, has been particularly critical to the success of this phase of the research. 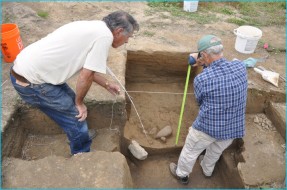 Part of the Desisti Excavation Site 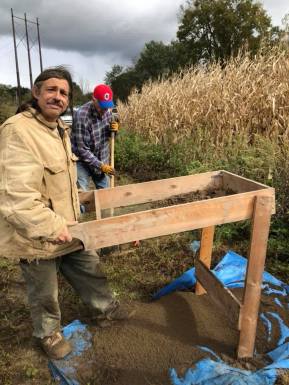 The excavations at the DeSisti site brought home the importance and relevance of applying modern archaeological techniques and technology to sites first noticed and documented in the early decades of the last century. With this success in place, SRAC is moving forward with plans to also evaluate and test other sites noteworthy in the region, emphasizing areas that may be impacted by current use or changes in the landscape. It is an exciting time at the SRAC’s archaeology division and we look forward to sharing our discoveries and results with the valley’s communities. 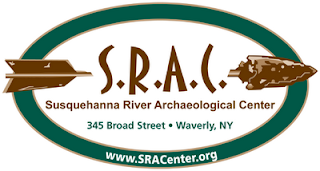 “Your donation today will keep our prehistoric past alive for generations to come.”